Minneapolis' Real Numbers were last spotted on Slumberland Records' "Wordless Wonder" LP which was quickly followed by a single on Market Square Records. Since then the combo has expanded to a 5-piece with the familiar Eli Hansen on guitar & vocals, James Blackfield on drums, Ian Nygaard on guitar and now featuring Cameron Soojian on bass and Sophie Durbin on keyboards. A 5 song EP entitled "Brighter Then" was recorded over the winter and will be released in 2021 on Slumberland in the USA and Meritorio in Europe. 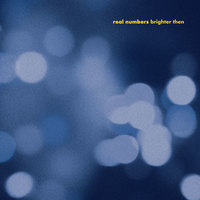